Start the New Year right by checking out this illuminating documentary: What Was Ours. It’s past time those of us in the States learned about the people whose ancestral lands, and often current lands, we occupy. And I mean learn about the people living now, not just their ancestors. Over and over I see Indigenous People ask that others 1) Realize they are still here and didn’t get wiped out entirely 2) See them in their current context instead of pretending they haven’t changed in hundreds of years.

It’s no accident that most Americans cannot and will not do either.

As I write this, they’re building another deadly tar sands pipeline in Northern Minnesota, ON ANISHINAABE LAND, against the express wishes and protests of the Red Lake Band of Chippewa and the White Earth Band of Ojibwe and anyone who cares about clean water and soil and sustainability and LIFE.

The genocide of Indigenous Peoples isn’t historical record, it’s on going fact. From Missing and Murdered Indigenous Women to the US consistently breaking treaties to sustained attempts to wipe out Indigenous cultures entirely through forced assimilation and preventing tribes from having access to their own artifacts and histories. 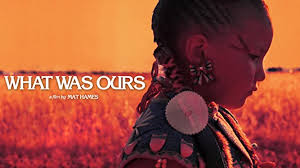 The last bit brings us to today’s recommended viewing. Here’s the synopsis from the Vision Maker Media page for What Was Ours:

“An Eastern Shoshone Elder and two Northern Arapaho youth living on the Wind River Indian Reservation attempt to learn why thousands of ancestral artifacts are in the darkness of underground archives of museums and churches, boxed away and forgotten. Like millions of indigenous people in many parts of the world, they do not control their own material culture. It is being preserved, locked away, by ‘outsiders’ who themselves do not know what they have.”

What Was Ours is streaming on amazon and may be available through PBS, where it has also aired. The one issue I had is amazon’s and not the films. I use subtitles, and for some awful reason, whoever made the English subtitles very often included “[mumbles]” instead of bothering to learn and transcribe Arapaho and Shoshone terms and sometimes, just words in general that even I, with my audio processing issues, could make out. I found the lazy subtitles with their gross accusations that the speakers weren’t speaking clearly EXTREMELY OFFENSIVE on multiple levels. So know that if you too use subtitles, that’s what you’re getting, but hearing people can in fact understand the speakers if they try.

I know this post could generally be considered depressing, but silence is violence and choosing not to learn the truth about the empire you live in and the atrocities it continues to commit in your name is a moral choice. I’d rather know so I can do the things that need done while also learning how to be a better, more respectful, more educated and inclusive person in general.

The film is brilliant and enjoyable and illuminating. I learned a lot and now have an even broader understanding of my commitments to landback and native sovereignty.